Check out Cartoonist, Chainsaw Chuck’s slide show of original art, learn about the man behind the art, and contact him with your questions and comments.

Welcome To The World Of Chainsaw Chuck! 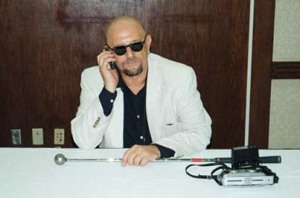 Cartoonist/Illustrator, Chuck Majewski, AKA Chainsaw Chuck, is an artist with a grand imagination.

Chainsaw Chuck, suddenly appeared out of nowhere, in what seems like almost two and a half eternities ago, in the winded city of Chicago. The constant clanging of machinery and the howling of the shift whistles of the local factories invaded his dreams and fueled his nightmares. Increasingly, his artistic creativity was forced into his waking hours. Myriad influences would guide his shaky hand and his equally shaky mind, his formative years being molded by an endless stream of Warner Bros cartoons, Creature Features, and mass quantities of coffee.

Then there was Rat Fink. Like all kids of that time, Chainsaw Chuck would draw an endless parade of Rat Finks on everything. Good practice for what would occur later. Soon after this phase in his life, Chainsaw was trans-located to Treasure Island’s beaches in Florida. Nothing much happened there, only Hurricanes and Tropical Depressions could create any localized excitement. There he would body surf all hours until the ocean no longer wanted him and flung his wayward body, back to his drawing board. Fortunately for him, this happened at the exact time California called, in the form of Ed ‘Big Daddy’ Roth.

Ed wanted Chainsaw Chuck to work on his Rat Fink comic book series. This introduced Chainsaw to the West Coast, Kustom Kulture Krowd. He was invited to art gallery shows from San Diego, Dana Point, San Clemente, The city of the Angels, and San Francisco. In this period of creativity he created the ‘…lost, Hula girl’ She would become a surf icon, and one of the most popular and successful surf designs ever.

The popularity of this design prompted the creation of a new line of Surf designs, created exclusively for Mad Tiki. It’s at this point that the story of Chainsaw Chuck really begins…